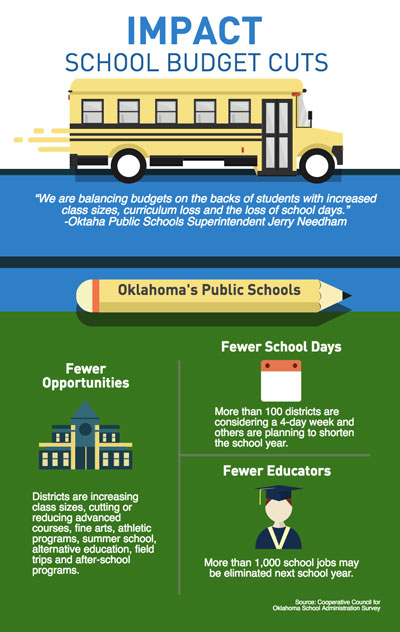 More than 100 school districts are considering a four-day school week or fewer school days as they cope with state funding cuts that also may force districts to cut more than 1,000 jobs and increase already large class sizes, according to a new survey of Oklahoma school officials.

The Cooperative Council for Oklahoma School Administration conducted the survey in late March to identify districts’ budget-cut plans for the current year and next year. Schools have suffered more than $50 million in budget cuts since January and even deeper cuts are anticipated for the coming school year.

Leaders at CCOSA and the Oklahoma State School Boards Association said the survey results underscore the need for state leaders to quickly finalize the education budget and are calling on lawmakers to do so before the end of April. Both organizations appreciate House Speaker Jeff Hickman’s attempt to cap next year’s education cuts at no more than 5 percent of current funding levels, while hoping for a smaller cut.

Timing is key so school leaders can accurately plan for cuts and protect classrooms as much as possible. Districts must begin the process of layoffs by the end of April in order to satisfy state laws regarding the employment of education employees.

“This devastating budget situation will cause this generation of students to suffer lost opportunities,” said CCOSA Co-Executive Director Ryan Owens. “School leaders are making life-changing decisions for employees, students and their families, and they’re being forced to do so based on estimates.”

“For many school districts, this isn’t a temporary situation,” said CCOSA Co-Executive Director Steven Crawford. “The choices school leaders are being forced to make will fundamentally alter many schools and permanently disrupt local communities.”

Shawn Hime, executive director of OSSBA, said school districts want to budget conservatively, but many districts will be required to lay off administrators and teachers. Timely budget information will allow districts to hold layoffs — and increased class sizes — to a minimum.

“If districts lay off too many teachers because they don’t have accurate budget information, Oklahoma may lose those teachers forever to the private sector or another state,” Hime said.

More than half of Oklahoma school districts educating more than two-thirds of Oklahoma’s student enrollment responded to the survey. The survey found:

Many districts have been trimming their budgets for years as state funding has fallen or stayed flat despite rising costs and increased enrollment statewide. Class sizes already have been creeping up both because of budget concerns and an historic teacher shortage. District leaders say even larger class sizes and fewer class offerings will be the most noticeable effects of next year’s budget cuts.

“Over a decade ago, we were forced to cut programs and have never been able to restore them,” said Moore Superintendent Robert Romines. “For years, we’ve been trying to protect classrooms and instruction from cuts. There’s nothing more we can cut that’s invisible to students and patrons.”

Moore expects to cut as many as 50 positions and is trimming administration jobs. The district also is scrapping its centralized enrollment center and moving that task back to school sites. The district will remain in compliance with federal special education laws, but also will cut back one-on-one services it provided to some special education students.

“If we just knew what the cuts were going to be, that would help. We know it’s a moving target for lawmakers, but we have to make our decisions now,” Romines said. “We need solid numbers, and we need to be sure we won’t be getting another mid-year cut next year when we really can’t adjust.”

Kiowa Superintendent Rick Pool said his students will notice a difference once budget cuts are enacted — and the cuts are likely to result in lower student achievement. For five years, the district has had a full-time reading specialist who monitors the reading level of every elementary student and provides one-on-one attention to those who are behind.

To save money, the specialist will spend half her day next year as a classroom teacher. Pool said that means only students who are most at-risk will receive the extra attention. “We won’t be able to provide that extra help to those kids who are on the bubble and that scares us,” he said.

Grove Superintendent Sandy Coaly quickly checks off the cost-saving measures under consideration for the coming year: modified bus routes, at least a dozen fewer teachers, elimination of some sports, cutting 10 days off the school year and slimmed-down academic offerings.

Coaly said the district’s semester-long ACT preparation class has been popular and effective, as evidenced by the daily announcements of seniors who have been accepted to college. That course is on the chopping block. So, too, is a popular independent science research class and AP Biology.

“This is not the conversation we want to have. We need to find ways to do more for our students, not less. Curriculum-wise, we’re taking a step back in time,” Coaly said.

She’s grateful the Grove community has stepped up to help fill in gaps over the last several years with fundraising, but it’s not enough to offset the severe decline in state funding.

“I keep telling my principals that we will always find a way to make it work — and we will. But I’m just sick to my stomach thinking about this backward step we are taking.”

Coaly said accurate financial information from the state Capitol would help tremendously as her district considers what cuts to enact for next year. The goal, she said, is to cut as little as possible even though increased class sizes and reduced academic offerings are unavoidable.

In Duncan, the district expects to absorb several administrator, teacher and support positions through attrition. The district is restructuring its employee benefits, capping the cost of substitutes and is pursuing other cost-cutting strategies. School board President Eric Davis said the district cut the family and consumer sciences program this school year, combined an English and reading teaching position and will discontinue driver’s education.

“We haven’t had to make as many cuts as some other districts, but it’s really difficult when you don’t know what the budget is going to be,” Davis said. “We want to make good decisions and minimize the impact on students as much as possible.”

Jones Superintendent Carl Johnson is hopeful the students in his district can go at least another year before the pain of budget cuts becomes obvious. A second-grade teacher position likely will be saved after city officials said they’d consider waiving half the district’s utility fees next school year. City approval is expected next month.

“Our city recognizes what a tough time this is, and how important these decisions are for our students,” he said. “We are grateful for a community that is willing to pull together.”

Johnson is taking a 5 percent pay cut, and the district’s principals also will have smaller paychecks next year. The district is discontinuing its lease for buses and will put its older buses back on the road — a move he calls “a little bit scary.”

The district trimmed the number of school days this year because he was losing teachers to another nearby district with a shorter school year. The school year will get even shorter next school year, and he plans to completely shut the district down for a week in August to save money. Those moves means the district’s support staff — already the district’s lowest-paid employees — will take a financial hit because they’ll be paid for fewer days.

While students may not much difference, teachers undoubtedly will. The district will not buy middle school or high school textbooks next year and some software licenses won’t be renewed. Johnson said he’s advised teachers they’ll have to find other ways to provide high-quality instruction.

Madill Superintendent Jon Tuck has eliminated $900,000 in salary and stipends over the last five years. He expects the district to absorb three to four support employee positions for the coming year and reassign a district-level administrator to a school site.

“We have a lot of administrators, teachers and support staff doing multiple jobs, which means they have a lot more work and students are receiving less individual attention,” Tuck said. “Right now we’re just in flux in terms of what we actually need to cut. That’s tough.”

Oktaha moved to a four-day school year this spring. For next school year, Superintendent Jerry Needham said the district is planning to reduce a junior high principal position, two certified teachers and 13 support positions. The district also cut the number of contract days for the remaining support employees and eliminated junior high softball and baseball.

“We are balancing budgets on the backs of students with increased class sizes, curriculum loss and the loss of school days,” Needham said.

Fort Gibson Superintendent Derald Glover said the future of several positions and programs are dependent on final budget numbers from the Legislature. The district is considering reducing its summer math and reading remediation program for elementary students and eliminating a popular early childhood program that allows high school students to work with 3-year-olds and learn about child development.

“At this point when you don’t have final budget numbers, you have to learn toward eliminating programs,” he said. “I hate that because it affects so many children.”

Read our compilation of news stories on school budget cuts.