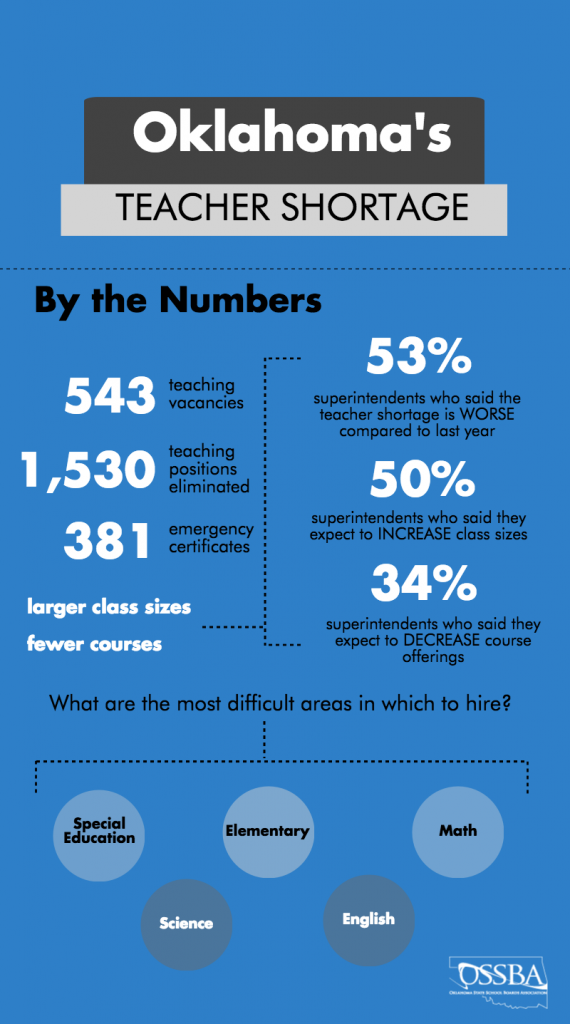 Oklahoma school districts are trying to fill more than 500 teaching vacancies as a new school year begins despite eliminating more than 1,500 teaching jobs since last school year, according to a new survey from the Oklahoma State School Boards Association.

The combined impact of budget cuts, too few prospective teachers and teachers opting for other careers or out-of-state teaching jobs is even worse than a year ago when schools had about 1,000 vacancies after eliminating 600 teaching jobs. This year’s vacancies do not include positions filled by teachers holding the more than 300 emergency teaching certificates state education officials approved in May, June and July.

“People who have never trained a day as a teacher are now responsible for teaching elementary school students how to read and do math. We have high school students who can’t take Spanish because their school can’t find a teacher. We are hemorrhaging teachers to Texas, Arkansas and Kansas,” said Shawn Hime, executive director of the Oklahoma State School Boards Association. “This is what it looks like when a state fails its schools and its children.”

OSSBA conducted the survey during the first two weeks of August. Districts representing about 83 percent of the state’s public school enrollment participated. The key findings:

Budget cuts were the primary factor in districts’ decisions to eliminate teaching positions. Even if that hadn’t been the case, many district leaders expressed doubt at their ability to find certified teachers to fill the positions because not enough new teachers are seeking to fill jobs vacated by more experienced teachers who are leaving the profession or leaving for work in another state.

In addition to the more than the 300 emergency teaching certificates already approved for this school year, the state Board of Education is expected to consider as many as 350 more emergency certificate applications when it meets Thursday.

“With every year that goes by, we make it more difficult for educators to do the job that we’ve hired them to do – provide every child with a high-quality education,” said Mike Mullins, OSSBA president and a longtime school board member for Sand Springs Public Schools. “I’m humbled and grateful that Oklahoma’s educators continue to rise to the challenge, but there’s no doubt our failure as a state to properly invest in our children and their education has consequences.”

The story is similar in Ponca City, where Executive Director of Human Resources Shelly Arrott said the district struggled to fill all its vacancies but likely was successful because the district cut 24 teaching positions at the secondary level and sought emergency teaching certificates to fill 10 teaching slots.

The district moved six paid days of teaching training from the summer to the school year to reduce costs. Arrott said the change resulted in a financial hit to support employees who now have fewer contract days. Support employees are being encouraged to take on other extra duty assignments like becoming a crossing guard to help bridge the financial gap.

School leaders offered mixed experiences with emergency teaching certificates, noting such teachers typically require more support than other new teachers and many are not returning for a second year. Amber Fitzgerald, executive director of human resources and communications for Enid Public Schools, urged the state to improve its alternative certification process by focusing more on classroom readiness.

“We are approached by a plentiful number of people with bachelor’s degrees who are interested in teaching,” she said. “Right now, the alternative certification process focuses on earning a piece of paper, not preparing for the job in an expedited way.”

Gregg Garn, dean of The Jeannine Rainbolt College of Education at the University of Oklahoma, is no stranger to Oklahoma’s teacher shortage crisis. He struggles with recruiting students into the profession. Making the problem worse is the fact that fewer students who graduate from the college are staying in Oklahoma to teach. And as enrollment in colleges of education declines and an increasing number of teachers seek alternative paths to the classroom, he said K-12 students are shortchanged.

OU has continuously raised its standards for admission to the college of education and now the average ACT for students entering the college is a 25, Garn said.

“We want to ensure students will have the best and brightest leading classrooms,” he said. “When the emergency certification pipeline is so wide, it has consequences for student learning. So many of those who come to the classroom through alternative paths are in and out in the blink of an eye. We want people who are going to be great and make a positive impact on thousands of students over their career – not just people who are going to be there for a semester or a year.”

Dozens of students typically take a third-year Spanish class, but Hogan eliminated the class because he couldn’t find a teacher. The inability to offer a competitive salary and to provide teachers with adequate classroom resources are major recruiting challenges, he said.

“We’re having to put a puzzle together with pieces that don’t match. We have missing pieces,” Hogan said. “We love kids, and when you can’t give what you feel is your best, it hurts. We’re doing a disservice to students.”