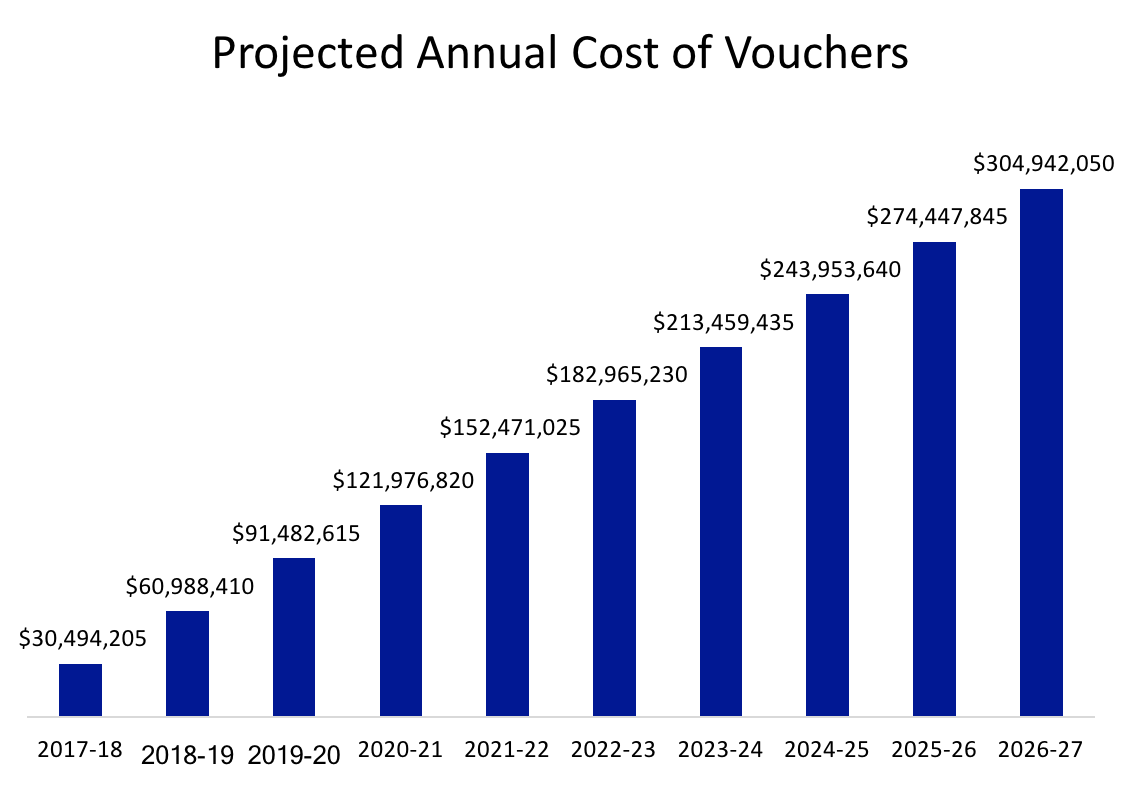 A proposed law to establish a voucher program in Oklahoma, Tulsa and Cleveland counties could divert available funding for Oklahoma public schools by as much as $30 million next year and $1.6 billion over the next decade, according a projected financial analysis from the Oklahoma State School Boards Association.

This week, the Senate Education Committee passed an amended version of Senate Bill 560 by Sen. Rob Standridge, R-Norman. The bill calls for vouchers to be made available to as many as 6,900 new students each year for the next decade, at which time the cap on the number of participating students would be eliminated.

SB 560 would establish a sliding scale for the value of the voucher dependent on the family income of the voucher recipient. The average annual amount of the voucher would range from $1,473 to $4,419 per recipient, according to the analysis. The analysis, which also includes a district-level breakdown of the potential cost, assumes state aid appropriations to schools and enrollment remain at 2016-2017 levels.

Standridge told committee members his intent was to protect rural schools from funding loss. However, because the bill funds voucher students before state aid is distributed to public schools, it would reduce available funding for all Oklahoma school districts.

“The bottom line is that vouchers are a funding cut for public schools and will result in fewer resources with which to serve the nearly 700,000 children in public schools,” OSSBA Executive Director Shawn Hime said. “It’s unbelievable that in a time of severe budget cuts for public schools that legislators would seriously consider diverting money from public schools to private schools with virtually no accountability for taxpayer dollars.”

Schools have sustained millions of dollars in budget cuts the last few years. This week, the state’s declaration of a revenue failure and a shortfall in the House Bill 1017 fund has resulted in $50.2 million in budget cuts.

The bill contains no limits on how the voucher money could be spent. Instead, it would leave the decision on what qualifies as an eligible voucher expense to the state Board of Education. Public schools must code and track every penny received and must comply with myriad mandates on how money must be spent, including a cap on administrative costs.

Also of concern, Hime said, is that the bill requires no reporting on the academic achievement on students who receive vouchers.

“Oklahoma’s children need lawmakers to focus on a long-term funding plan for education so every student is taught by a highly qualified teacher who has the resources available to provide the best possible education for every child,” Hime said. “It’s time to stop creating unnecessary and harmful distractions and work together to quit shortchanging our children.”