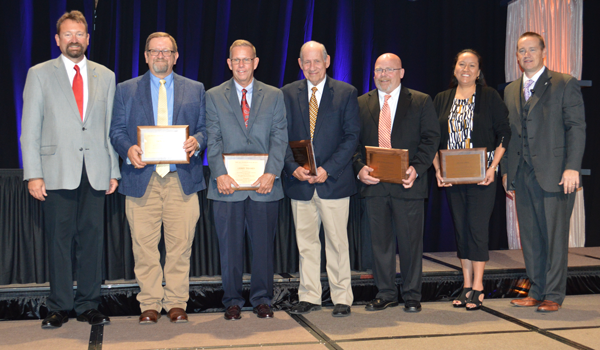 “Local school board members play a critical role in our communities as they work to make sure our children are well-prepared for the future,” said OSSBA Executive Director Shawn Hime. “We are proud to honor these board members for their dedication, commitment and service.”

Alsup has served for two decades on the Choctaw-Nicoma Park board, where he is recognized for his dedication, his accessibility to patrons and for holding administrators accountable.

Thames is a Berryhill native who has served on his board for 12 years. He is active in other community and professional organizations in addition to his school board responsibilities.

Millican has served on the Oklahoma City school board since 2010 and serves as the board’s academic committee chairman. He also serves as the district’s representative on the OSSBA Board of Directors.

Hill has served on the Anadarko school board for five years and founded the annual community Back to School Expo, which provides local students with a great start to the school year.

Looney is a visionary board member who has served for 13 years. He also serves as region director on OSSBA’s board of directors.

The All-State board is an honorary board that includes five of the most outstanding board members of the year. Nominations can come from superintendents or other board members, and winners are selected by a committee of board members who serve on OSSBA’s board of directors. The selection committee doesn’t include board members from nominee districts. Each winner received $400 for their district to spend on instructional materials and will be recognized at OSSBA’s annual conference in August.

The committee also selects one All-State board member to receive the Buddy Spencer Leadership Award. The recipient is someone who demonstrates leadership on a local or state level and a dedication to improving his or her boardsmanship. The award includes $600 for the district to spend on instructional materials.