Oklahoma’s public schools are poised to hire more teachers and make other classroom investments thanks to back-to-back years of increased education funding, but teacher recruitment and retention remain challenging, according to a new survey from the Oklahoma State School Boards Association.

This is the sixth year OSSBA has conducted the survey, which was completed by 305 school districts that serve 81% of the state’s public-school students.

“The survey shows the historic investment in teacher pay is beginning to put a dent in the teacher shortage. The overall hiring of more teachers is an especially encouraging sign, but it’s also obvious the teacher pipeline is weak,” OSSBA Executive Director Shawn Hime said. “The teacher shortage crisis is not over.” 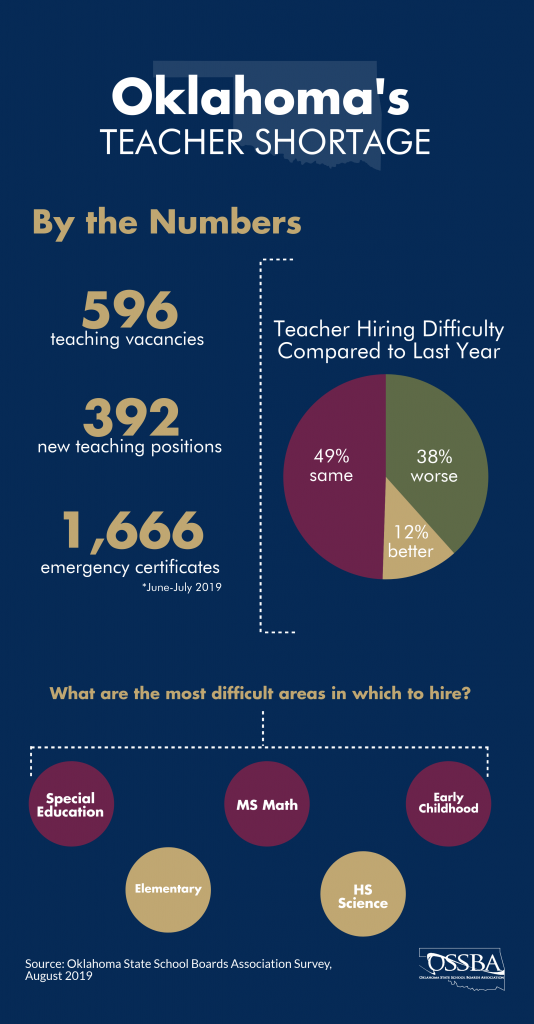 During much of the last decade, funding failed to keep pace with increased student enrollment, and budget cuts forced schools to eliminate teaching positions. Hime said the reduction in teachers during tough budget years and the financial inability of districts to hire more teachers as enrollment grew likely masked the depth of the shortage. With the restoration of many positions, it’s no surprise that finding qualified teachers remains a challenge, he said.

This year’s survey also provides a first look at district plans for spending the $133.6 million in new state money for education. The vast majority of districts said teachers will receive an $1,220 across-the-board raise that was a priority of state leaders in approving a record education budget. Many of the state’s largest districts – which employ the largest number of teachers – are implementing raises that will exceed $1,220.

Support employees in many districts across the state will receive pay raises, and district leaders also are investing in teacher training, additional counselors and nurses, technology upgrades, classroom supplies and resources, virtual education programs and safety and security upgrades.

“Schools are lowering class sizes, expanding student support services, and investing in the classroom. All of these improvements will benefit students and are evidence we’re moving in the right direction,” Hime said.

Even with new education funding, Hime said Oklahoma remains last in the region when it comes to per-student spending. The state must stay the path of increasing education funding in pursuit of the regional per-student spending average. Doing so would allow districts to offer even more competitive pay compared to other states and the private sector, encourage more youth to consider education as a profession and improve student learning conditions, he said.

“I’m optimistic but also realistic. State leaders deserve thanks for directing more support to schools, but I think they also understand we aren’t at the finish line when it comes to ensuring all teachers and all students have the resources and support they need to excel,” Hime said.

Superintendents said the teacher applicant pool remains painfully shallow. Pay raises have been particularly helpful in keeping retirement-eligible teachers in the classroom and have improved morale, but district leaders are worried many of those who opted to stay will retire after the 2020-2021 school year. Teachers who remain in the profession for three years after last year’s average $6,100 pay raise could receive up to a 20 percent increase in retirement earnings. If many teachers choose to retire, the teacher pipeline may still be too weak to replace retirees with quality teachers. The looming retirement bubble also could collide with the expected reinstatement of class-size mandates in two years.

Jenks is one of several large districts adding teaching positions for this school year while struggling to find qualified applicants. Superintendent Stacey Butterfield said the district is providing more support for its new teachers and believes the state could do more to help support teachers by simplifying the certification application and testing process.

“There’s no doubt the raises have increased morale, brought teachers back to the profession, and delayed retirements,” Butterfield said. “Still, we are years away from seeing the true impact, and it will take more support and continued investment to get where we need to be.”

Yukon Public Schools is among the most generous with raises this year, awarding a $3,220 raise in addition to step increases for teachers. The district has added teaching positions in addition to hiring an assistant principal, counselor, speech pathologist and school psychologist. The district also is putting more resources toward safety and security.

“Our focus is dedicating resources where we believe it will be most beneficial for children,” Simeroth said. “In Yukon, just like the rest of the state, the lack of funding put all of us behind in some areas where students need more support so that’s part of our focus as well. We are appreciative of our legislators and the governor for recognizing the need and moving in a positive direction.”

In Woodward, Superintendent Kyle Reynolds is banking on a several initiatives to help combat the shortage and hired eight teachers from out of state. The district has offered retention and signing bonuses in addition to tuition reimbursement for staff seeking a graduate degree. Woodward also offers an elective class for high school students interested in teaching. Several recent graduates are in college and pursuing an education degree, he said.

“We’re doing everything we can to provide the best possible education for students, but the recovery is going to be slow,” he said.

In Miami, Superintendent Jeremy Hogan said vacancies have been difficult to fill despite increased interest from applicants from Missouri and Kansas. The district is dedicating resources to prepare and retain those hired on an emergency certificate to help lessen turnover. Those teachers must attend a two-day boot camp before the school year begins, attend a series of monthly required trainings, meet with instructional coaches and are assigned a mentor. The district retained most of its emergency certified staff from last year.

Hogan said the district also has added school-based social workers to help support students and hopes to hire more counselors in the next few years.