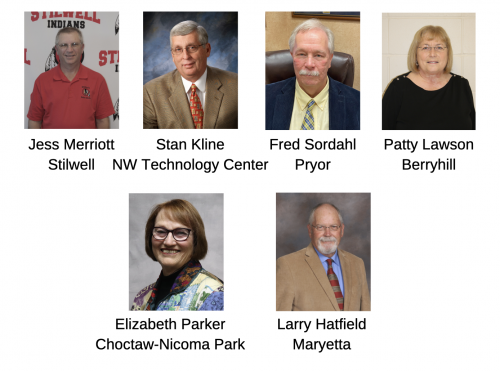 In addition, Larry Hatfield of Maryetta was selected as the 2020 Distinguished Service Award winner.

“Local school board members play a critical role in our communities as they work to make sure our children are well-prepared for the future,” said OSSBA Executive Director Shawn Hime. “We are proud to honor these board members for their dedication, commitment and service.”

The winners will be honored at the annual Oklahoma State School Boards Association/Cooperative Council for Oklahoma School Administration joint conference in the fall.

Merriott has served 17 years on the Stilwell board, where he is quick to volunteer with any project, has hosted exchange students from Vietnam, Thailand, Brazil, Mexico, Germany and Belgium while they attend Stilwell High School, and helps ensure the district continues to make positive changes on behalf of students. Outside of his school board service, Merriott is active in his local church and mission activities.

Kline has served on the Northwest Technology Center board for 14 years and has a long history of public service. He’s a former city council member and mayor in Alva, a former math teacher and served in the Oklahoma National Guard. While on the technology center board, he helped lead expansion of the technology center to serve more students and to develop long-range infrastructure plans. His family also created a scholarship to benefit Northwest students.

Sordahl is a 13-year member of the Pryor school board and has served as president for the majority of his tenure. Over the last decade, he has consistently helped the board through planning and implementation of a series of bond issues worth $150 million. He helped found the Northeast Oklahoma Public Education Alliance, a coalition of board members and educators advocating for the area’s public school districts.

Lawson is a 16-year member of the Berryhill school board, serving as president, vice president and clerk multiple times throughout her service. Lawson has been a visionary leader for the district, providing leadership in strategic planning and bond issues. She has also served as the board’s legislative liaison for the last 15 years.

Parker brought a strong education background to her 22-year service on the Choctaw-Nicoma Park school board. She began her teaching career in 1964 and taught in multiple districts throughout Oklahoma. Following her retirement in 1997, she continued to work and volunteer in various education capacities in districts throughout the Oklahoma City metro area. She served as a mentor for new board members and has been an active advocate for public schools.

Hatfield has served on the Maryetta board for 39 years and began his current three-year term in April 2019. Hatfield models professionalism and respect while serving as a board member and is frequently seen at events throughout the district, sometimes lending his own music and comedic talents. Hatfield was the driving force behind the establishment of the district’s art program, which has led to national awards for students. His leadership was also instrumental in the district expanding its school campus from four to 65 acres.

The All-State board is an honorary board that includes five of the most outstanding board members of the year. Nominations can come from superintendents or other board members, and winners are selected by a committee of board members who serve on OSSBA’s board of directors. Each winner receives $400 for their district to spend on instructional materials and winners will be recognized at OSSBA’s annual conference in August.

The committee also selects one All-State board member to receive the Buddy Spencer Leadership Award. The recipient is someone who demonstrates leadership on a local or state level and a dedication to improving his or her boardsmanship. The award includes $600 for the district to spend on instructional materials.