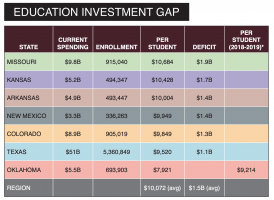 Oklahoma’s persistent education investment gap will narrow thanks to more than $900 million in state investments in public school students and a strong economy in recent years, but the state will likely remain last in the region on what it spends per student for at least the next few years.

A new report from the National Center for Education Statistics analyzes data from the 2016-2017 school year to detail state-by-state comparisons. Oklahoma’s per-student spending of $7,921 that year was a decrease from the prior year and was a distant last among the six other states in our region: Missouri, Kansas, Arkansas, New Mexico, Colorado and Texas. 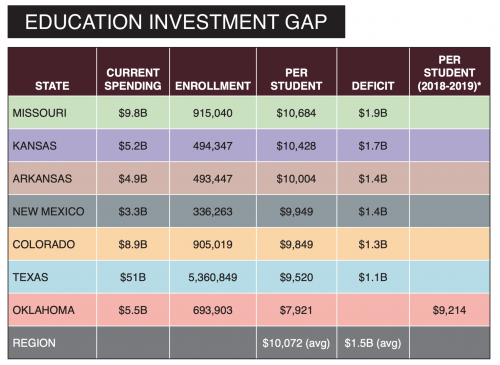 State education officials have calculated Oklahoma’s most recent school year per-student spending at $9,214, which captures a more than $900 million increase from fiscal year 2017 to fiscal year 2019. That includes state funding for the average $6,100 teacher pay raise in 2018 as well as increases in other state and local funding sources for schools. Over that time, student enrollment in Oklahoma public schools also increased about 5,000 students.

More recent comparison state-by-state figures aren’t available. However, the data means even if education funding in other states stood still the last two years, Oklahoma’s per-student investment likely would still trail Texas – the next closest state – and the regional average.

Oklahoma would need to invest about $600 million more annually to reach the 2016-2017 average of other states in our region, but that doesn’t account for state or local funding increases for this school year or enrollment increases.

“Other states aren’t standing still when it comes to investment in children and neither should Oklahoma,” said Shawn Hime, executive director of the Oklahoma State School Boards Association. “This report is a reminder to policymakers what educators and families already know: ongoing, new education investment is critical. State investments and a strong economy have helped schools tremendously the last few years. We know we’re on a path to continue narrowing the gap and better supporting children and teachers if we stay the course. Our children need us to continue to invest with the urgency that we have shown the last two years.”

The gap means Oklahoma students face a daily lack of resources available to children in other states. With additional support, schools could continue to up compensation packages for teachers to combat the teacher shortage, restore teaching positions cut in past years to reduce class sizes, add back or add new academic and extracurricular opportunities, hire more counselors and/or support staff, and offer more social, emotional and health supports for students. 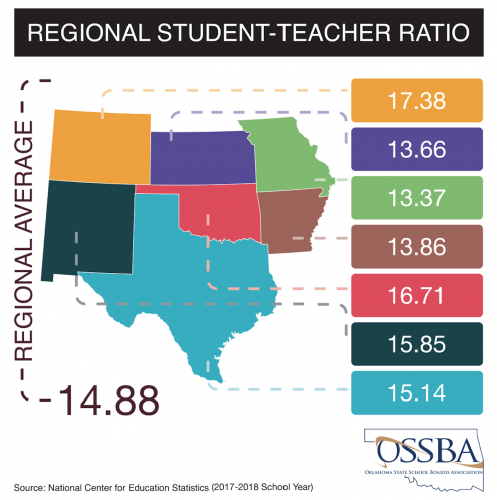 So far this school year, Oklahoma has issued nearly 3,300 emergency teaching certificates – a record number – as schools struggle to fill vacancies. Because of rules against holding an emergency certificate for more than two years, as many as 1,000 of those teachers could be ineligible to teach next year if they are unable to complete requirements for full certification.

“The teacher shortage hasn’t gone away. As a dad and as a life-long educator, it’s clear to me that the only way forward is to continue increasing our commitment to our children’s education,” Hime said. “We’ve made considerable progress, but a sustained investment is the best way for Oklahoma to change the trajectory for the children in today’s public school classrooms and for future students.”

Highlights from the report include:

Oklahoma began using the NCES definition of current spending as its official per-student spending measure in 2017. The NCES current spending calculation captures the day-to-day expenses of operating schools and districts. It includes salaries and benefits, supplies and purchased services for instruction, instruction-related costs, support services and other elementary/secondary current expenses. Expenses associated with repaying debts and capital outlays including land purchases, school construction and repair and equipment are excluded from current expenditures. Expenses for adult education also are excluded.