OSSBA Encourages Oklahomans to Vote No on State Question 800 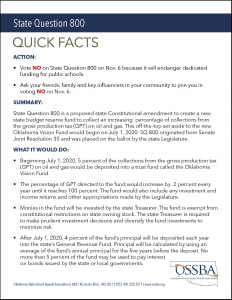 State Question 800 could endanger an important source of dedicated revenue for Oklahoma schools, and the Oklahoma State School Boards Association is encouraging Oklahomans to oppose the ballot measure on Nov. 6.

“Simply put, this state question is vague, filled with unknowns and could erode millions of dollars in dedicated funding for public schools,” OSSBA Executive Director Shawn Hime said in a message to education leaders across the state.

Since schools currently receive about 10 percent of GPT collections as dedicated revenue, this will result in reduced funding for schools without a guarantee that the lost revenue would be offset.

“There’s nothing visionary about the planned erosion of dedicated funding for public education,” Hime said. “It’s bad policy, and a step backward. The state’s largest ever teacher pay raise that passed last session was a great first step, but the work of properly investing in public education isn’t finished. Our per-student investment in education is still last in our region. Our students deserve better.”

Other concerns include that the fund would be allowed to grow perpetually without a cap and without a mechanism for the legislature to defer deposits or tap the fund in case of a revenue shortfall or other emergency. Only a small percentage of the fund’s balance would be available for appropriations, and some of the money could even be diverted to fund obligations of cities and counties.

Gov. Mary Fallin vetoed a similar measure because of myriad concerns, and Hime said even an ill-conceived constitutional amendment would be difficult to undo.

“I appreciate the intent behind the question and the desire to stabilize the state budget, but this isn’t the answer,” Hime said.