Serving on a school board is a great way to give back to your community, and the Oklahoma State School Boards Association exists to support local school boards. We are a nonprofit organization that works to promote quality public education for the children of Oklahoma through training and information services to school board members and school district leaders.

Board members have a tremendous opportunity to invest their time and energy in a cause that has transformative power: public education. Board members who are already serving have much to offer their communities through continued service because they have valuable experience and historical knowledge. Other community members may find school board service a meaningful opportunity to contribute and offer new or different viewpoints and experiences. Boards need diverse perspectives and voices!

As you consider running, think about what being a board member means to you, your family and your community.

Local boards govern local school districts. Board actions affect the families of hundreds — even thousands — of students and employees. The duties of a board member include working with other board members to craft policies, approve a budget, and hire/supervise the superintendent who serves as CEO. It’s an important commitment and should be considered thoughtfully.

How can I learn more?

OSSBA will host two free informational webinars for prospective board members. OSSBA Executive Director Dr. Shawn Hime and OSSBA Deputy Executive Director and General Counsel Julie Miller will lead the presentations on Nov. 17 and Dec. 15. The sessions will be interactive, and questions are welcome. Click here to register for the Nov. 17 session and here to register for Dec. 15.

What else do I need to know?

So You Want to Be a School Board Member?

OSSBA will host two free informational webinars for prospective board members. OSSBA Executive Director Dr. Shawn Hime and OSSBA Deputy Executive Director and General Counsel Julie Miller will lead the presentation on Dec. 15. The sessions will be interactive, and questions are welcome.

ELECTION RESOURCES FOR DISTRICTS AND CANDIDATES 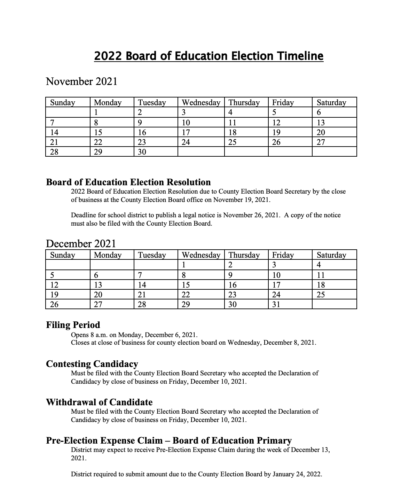 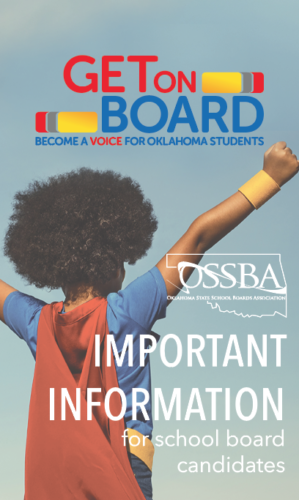 When must a candidate file for the school board election?

Candidates can file from Monday, Dec. 6 through Wednesday, Dec. 8, 2021. 26 O.S. § 13A-105. Keep in mind that filings must take place before the close of business at the county election board. Click here to download the candidate filing packet.

When are the school board elections?

The school board general election is April 5, 2022. If more than two candidates file during the December filing period for an open seat or unexpired term, the election will be Tuesday, Feb. 8, 2022. If no candidate receives more than 50 percent of the vote, the top two candidates will proceed to the school board general election on Tuesday, April 6, 2021. 26 O.S. § 13A-103. A candidate who receives a majority of the vote (50% + 1) is elected.

Who is eligible/ineligible to file for the school board election?

No person shall be eligible to be a candidate for or elected to be a member of the board of education of a school district unless the person has been awarded a high school diploma or certificate of high school equivalency. 26 O.S. § 13A-106.

No candidate shall be eligible to be a candidate for or serve on a board of education if he or she is currently employed by the school district governed by that board of education or is related within the second degree by affinity or consanguinity to any other member of the board of education or to any employee of the school district governed by the board of education. 70 O.S. § 5-113. Another exception applies for districts with an average daily membership of less than 400. A candidate for school board may be related by blood or marriage to a current district employee, if the district has an average daily membership of less than 400 and has adopted a policy permitting the exception pursuant to 70 O.S. §§ 5-113, 5-113.1 (effective April 23, 2018). Second-degree relatives may be employed as substitute teachers or as temporary substitute support employees if ADM is less than 5,000.

Who are “second degree” relatives?

Who can contest a candidacy?

How does someone contest a candidacy?

The petition is to be filed with the Secretary of the County Election Board who accepted the declaration of candidacy. The contesting of candidacy requires a $250 deposit.

Upon the filing of a petition, the secretary of the appropriate election board must set the matter for a hearing. The hearing cannot be held fewer than three (3) days from the filing of the petition.

It is the obligation of the petitioner to have the candidate served with a copy of the petition. The service must be made in person, where possible, within twenty-four (24) hours after the date and place of the hearing has been set by the county election board secretary. Service must be made by the Sheriff of the county of residence of the individual whose candidacy is being contested.

The petition may be heard without formal pleadings being filed in answer or reply to the contesting petition. The election board may serve subpoenas and compel the attendance of witnesses and production of evidence. At the conclusion of the hearing, the board shall render its decision and the vote of the individual members in writing. The decision of the board shall be final.

Should the candidate whose candidacy is being challenged desire to appear in answer to the contest, the candidate is required to deposit with the secretary of the election board a cashier’s check or certified check in the same amount as that filed by the petitioner.

The burden of proof remains on the petitioner to sustain the allegations in the petition. Failure of the candidate to appear or answer shall be deemed default and shall constitute an admission.

What are valid reasons to contest a candidacy?

A valid reason to contest a candidacy would include the candidate failing to meet the legal eligibility requirements outlined above in “Who is eligible/ineligible to file for the school board election?” Reasons may include, but are not limited to:

What if no one files for a board seat?

If only one person files for the seat, does the incumbent immediately turn possession of the seat over to the new person?

If a new person will be taking the board seat, when does the current school board member’s term end?

The current school board member will continue serving until the date of the election passes and the election results are certified.

How does a new school board member take the oath of office?

The oath can be found at 70 O.S. §5-116. This oath can be taken at a board meeting after the board member is certified by the county election board. The method by which the oath is taken can vary. The new board member can read aloud the oath, or the board can utilize a “repeat after me” format. The oath can also be taken before a notary public.

How long will a current board member (whose term is ending) serve if he/she does not intend to run again or loses the election?